During the past two sessions, the brave adventurers traveling through The Shadowfell have been without their devote Cleric of Pelor as he is on vacation worshipping the Sun in some foreign land. How typically Pelorian of him! The remaining party members are a Barbarian, Ranger, Fighter and Rogue; healers, they are not. A solution was needed to fill the gap because continuing the adventure without allowing the party access to a healer would have been a death sentence. A variety of options were available.

I decided to create a NPC that would join the party as part of the storyline in the campaign while our Cleric was missing. The NPC did an admirable job of serving as the healer for the party, but she also served a number of unexpected purposes during the sessions. She increased the amount of roleplaying during a combat-heavy portion of the adventure, and she increased my level of enjoyment because I was also playing a character.

The following column is a description of how I replaced our missing Cleric in two consecutive sessions with a Non-Playable Character (NPC) who fulfilled the Healer role in our Dungeons & Dragons 4th Edition campaign. Below I present how I inserted the NPC into the party and the variety of functions she served during the sessions when our Cleric was out of town.

END_OF_DOCUMENT_TOKEN_TO_BE_REPLACED

I have been hesitant to give out Artifacts and Cursed Items to players in my Dungeons & Dragons 4th Edition campaign. Artifacts have intimidated me to a certain degree since it is one more facet of the game the players and I would need to track. I did not want to add another complication to the plot of the adventure, which has admittedly gotten away from me at times during the campaign. I could also never figure out how to adequately roleplay an Artifact, although experiencing the Narrator from Bastion gave me a fantastic template to bring an Artifact to life. I did give the party an Artifact in recent months, but they have ignored it for the most part (another article for another day).

As for Cursed Items, I have been intrigued by them since reading through examples of items curses in Mordenkainen’s Magnificent Emporium (p. 111-115). I am hesitant to punish players, and giving a player a cursed item certainly imposes a penalty on the player receiving the item and the party because the player with the item is now less effective. In a recent interview Monte Cook discussed the dangers of avoiding all forms of punishment as a game designer and DM. In recent sessions, several factors came together to grant me to opportunity to introduce a cursed item into the campaign.

Below I detail the circumstances that led to me giving out a cursed item to the players. I discuss how I provided clues to the players that the item was not all it appeared to be and emphasis how the item  fit into the story of the campaign. I discuss how the players have handled the discovery of the cursed item and conclude with alternatives to the specific Removing An Item Curse rules listed in Mordenkainen’s Magnificent Emporium (p. 111), which seem quite anticlimactic.

END_OF_DOCUMENT_TOKEN_TO_BE_REPLACED

The April edition of my monthly monster-building column, No Assembly Required, is now posted at This Is My Game.

The column, No Assembly Required, features a monster that can be inserted into a Dungeon & Dragons 4th Edition campaign. Each monster in the series includes comprehensive information including Origin, Lore, Combat Tactics, Power Descriptions and Stat Block. Visit This Is My Game to review this month’s monster, Kemah Timmonen. Kemah is an Paragon-Tier female shadar-kai that will feel right at home in any campaign, but certainly an adventure in The Shadowfell. 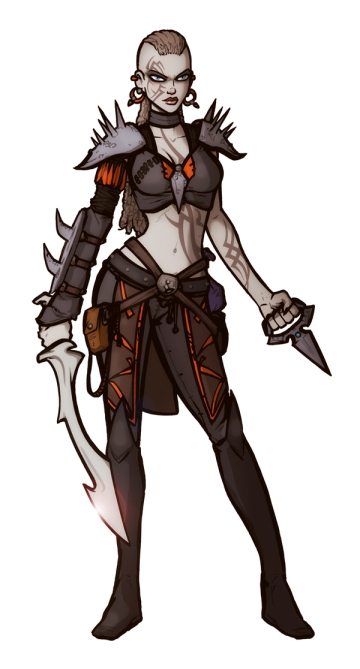 My goal with Kemah was to create a ruthless villain to go along with the uneasy and violent themes of The Shadowfell. I wanted her to enhance her abilities as a Controller and crafted powers to fit into this theme. I modified what it means to be Dominated and created a new status effect, Conflicted.

And I also wanted her to have orange and black in her color schedule because it’s playoff hockey time and I’m a huge Philadelphia Flyers fan. The Flyers are currently battling in the first round of the Stanley Cup Playoffs – so Let’s Go Flyers!

Visit This is My Game for the full description of Kemah Timmonen, and check out previous entries in the series!

Many thanks to Grant Gould who provided the fantastic design and illustration for Kemah.

Some parts of [the Isles] are eternally on the verge of collapse . . . Parapets droop at extreme angles, black stone seeming to flow down their faces like wax running down a candle. Cracked edifices lean together over narrow cobbled streets and end abruptly at the shore . . . Monsters of many sorts lurk among the ruins, and these creatures can snatch even the canny folk who live near such threats and know of them. The thick, black fluid known as necrotic seepage sometimes boils up from the polluted earth, and islanders who know enough to stay away from it can avoid contracting the disease it carries.

I could have drawn a map, which would have made my life significantly easier, but I imagined something else entirely. The images conjured from the flavor text seemed to need something more than a two-dimensional hand drawn map, and this is what I created.

Below, I present my low-cost solution to bringing the Shattered Isles to life.

END_OF_DOCUMENT_TOKEN_TO_BE_REPLACED

One of the fun challenges of running a session in the Shadowfell is trying to convey the magnitude of wickedness, gloom, despair and violence. The DM can hit the five senses quickly through flavor text, but the Shadowfell seems to call for even more attention to detail in terms of convincing the players that they should be in a constant state of fear.  It is a challenge I continue to face each week as my players continue to adventure in Gloomwrought (and Beyond).

A tool provided in the Shadowfell boxset is the Despair Deck, which is a nifty tool to layer additional mechanics into the game to demonstrate the negative effects of simply spending time in the bleak realm. The suggestions are to use the Despair Deck any time a character takes an extended rest while in the Shadowfell or if they witness a rather nasty scene such as “a lair where ghouls have been feeding off townspeople.” I tweaked this second approach over the weekend when the party arrived at an enormous pile of rotting corpses. The party decided to search through the pile in the hopes of finding gold or other valuables. At this point, I asked everyone who was searching to roll a saving throw; those that failed were required to draw a card from the Despair Deck.

The Save vs. Despair option seemed appropriate to the story, and I believe it’s a good tool for any DM to utilize. A fellow gamer suggested the DM should consider the character’s Race with Despair effects. For example, perhaps characters with the Shadow origin are not affected; also, there is now a Warforged in my adventuring party and I probably should have skipped him saving against Despair (his roll was successful anyway, so it turned out to be moot). Even without the Despair Deck, the DM can create potential “Save vs. X” effects based on the story and encounters in the campaign.  This is another interesting way to navigate the Save vs. Death issue.

There are many other ways for a DM to convey the required emotions the Shadowfell outside of the Despair Deck. Below, I talk about additions I made to one of the published skill challenges in the Shadowfell Encounter Book to increase the level of horror in the adventure.