Strip away the rules and combat mechanics. Take away the character-build and monster-creation options. Stop rolling dice and moving miniatures around the table. Now, look around . . . What remains is you – the DM – sitting down with a group of people communicating with each other. I explain below how communication between you and your players should take place in the Arena. There is a great deal of commentary on game mechanics, stats and rules, but a dearth of advice on how to properly communicate with your players. It is a niche I will humbly try to fill with this and future articles.

It is not my goal to regurgitate “pop-psychology” ideas or encourage you to “analyze” the players in your game. You do not need to be a psychologist or professional counselor to be aware of some basic communication factors that could be influencing your gaming sessions. What does seem lost in discussions of gaming is the ability of the DM to react and respond to the numerous dynamics between them and the players at the table.

For instance, a typical gaming group has one dungeon master and approximately five player characters. That means the DM is communicating with five different people all at the same time through speech, body language and gestures. On top of this, each player is communicating with the other four players and the DM at the same time through their speech, body language and gestures. At any given moment during a gaming session with a DM and five players, there are 30 lines of communication. Yes, 30!

I would argue the DM should be aware of all lines of communication during the gaming session, which is quite a daunting task. One method I believe can assist DMs to understand the communication patterns at the table is a theory, the Johari Window. The Johari Window is a 2×2 matrix that displays how communication between self and others plays out in any situation. The four quadrants are: 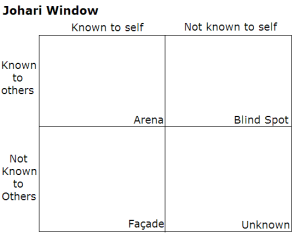 Consider each quadrant while running your campaign.

Arena: Both self and other are aware of.

Blind Spot: Self is not aware of, but others are aware of.

Facade: Self is aware, but others are not.

Unknown: Self and others are both unaware