The first exposure I can remember to superheroes were the Superman movies and the old Batman television series. The former was rather earnest and the later was incredibly campy, and both set the bar in my mind for what type of film or television was possible when based on a comic book. The initial Batman movie was such a phenomenon in 1989! Culture moved so much slower back then (trust me), so Batman owned what felt like a year or more of everyone’s attention. The movie expanded my perception of what was possible in a movie based on comic book characters, and it fueled an interest in comics as a hobby.

My first and really only dive into comic books was during the early 1990s when Image Comics splashed onto the scene. I was certainly aware of comic books before then and knew a few things about common superhero lore, though I didn’t start collecting until I had a chance to be in on the ground floor of something. The idea of getting caught up on characters and franchises that had been going on for many years or decades seemed daunting, and starting with #1 of any new book felt exciting.

I also sprinkled in other titles from those days like Spider-Man 2099 and the Star Wars Dark Empire issues. It all became too cumbersome and expensive though, and my interest in comics faded as I progressed through high school and into college. Superheroes remained something I was aware of, and I slowly got interested in graphic novels many years later – finding titles like Watchmen and Y: The Last Man quite profound.

The first X-Men film in 2000 was a reminder that the stories within comic books can be translated into quality entertainment at the cinema, and the first sequel in 2003 was a wonderful comic book movie featuring talented actors performing interesting roles with twisting allegiances, snappy dialogue and stunning visuals. Spider-Man and Spider-Man 2 arrived around this time, and both of them delivered quality experiences. The Christopher Nolan Batman Trilogy started in 2005, and the massive success of The Dark Knight (released July 18, 2008), fueled by the otherworldly and tragic performance by Heath Ledger, gave superhero movies increased credibility.

A few months earlier in 2008, another superhero movie, Iron Man, opened and started a chain reaction of events that would result in the following completely silly and staggering box office numbers below. Even with the success of several superhero movies and franchises, nothing could predict the outrageous popularity and success of what became known as the Marvel Cinematic Universe: 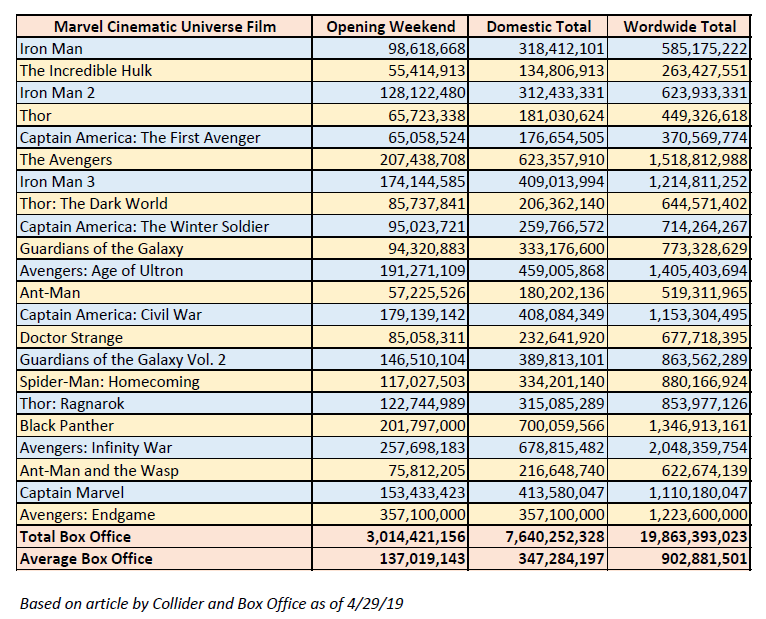 Look at those numbers. It is absurd!! Twenty-BILLION dollars worldwide and counting from worldwide box office!? And that doesn’t factor in merchandising and gods-only-know what else they have as revenue streams.

Marvel released a movie about Ant-Man, and made half-a-billion dollars worldwide. 500 MILLION!? Ant-Man!?

I believe I have seen every one of these films in the theater, likely within a week or two of them releasing. They rarely fail to deliver on entertainment, and they have continued to thrive at the box office and avoid (for the most part) the natural cultural backlash that comes with anything that is this wildly successful.

I’ve tweeted this numerous times over the years; it amazes me how Marvel continues to keep this up. The casting has been fantastic, the marketing is always top-notch, and the films deliver escapism entertainment with heart and humor, and they make it look easy.

So after I saw Avengers: Endgame, I wanted to explore how this all happened. How did Marvel get the point that it could release a three-hour movie about a group of heroes battling back against a cosmic villain most people hadn’t heard of 10 years ago that culminated a 20-film story line – and it would be the highest-grossing movie of all time (most likely soon)?

How is Nebula, a side character from the pages of in a C-level comic book (in the eyes of the mainstream), one of the narrative linchpins of this film?

How does it all work!?

In the latest episode of Childhood Ruined, my co-host and I welcomed Duane Sibilly to the show to discuss these questions, and geek out about the wondrous splendor that is Avengers: Endgame.

I hope you’ll give it a listen!

Duane has been cultivating Hammer Gaming, a community for like-minded players who wish to avoid the toxicity that is often found in online games. He speaks about consulting with other gamemasters like myself, and we talk through an example of how we collaborated to flesh out various characters in my Dungeons & Dragons campaign.

Duane then delves into his experiences as a person of color playing video- and tabletop games, and the obstacles he has encountered over the years while trying to engage with the hobby. Here is a brief segment of this discussion:

I’m a person of color and… finding groups of gamers that are diverse continues to be a challenge. It can be very difficult to find other folks who look like me. And that’s not a huge problem; I’ll play with whoever wants to pull up to the table. It would be nice to have a bit more diversity in gaming. And I’ve encountered that on both ends – both as someone who helps run a community and have new gamers come to us, and as someone who goes to conventions and wants to sit down at tables with strangers and play games with them. It doesn’t happen very often but every now and then – I’ll get a funny look. Like, “Oh, hey, don’t see people like you very much at the table.” And I just shrug and play, because I’m there to play…

The representation problem isn’t just at the tables. It’s also in the content. I have a very difficult time finding folks who look like me or who represent stories outside of the Western European norm in the content published by tabletop RPG creators… To quote Avery Brooks who played Ben Sisko on DS9, “It is very important that brown children and brown people in general can see people who look like them in contemporary mythology.” And I really hope more effort is made… In addition to being at the table, it really needs to start showing up in the content. And I think it’s not going to start showing up in the content until more creators like Quinn [Murphy] are employed by the publishers or contracted by the publishers and say, “Hey, look. We need to tell these kind of stories. Let’s go ahead and hire the people that can tell them.”

He offers advice for other players and content creators to make gaming a safer space for a wider audience. He details how Hammer Gaming came to be created, and how it has evolved from a World of Warcraft guild to a vibrant community of 40-50 friendly gamers. We close the show by talking about Destiny 2, and he tries to convince me to dive in when it releases for PC.

Enjoy the 20th episode of Ego Check with The Id DM! And please subscribe to the podcast at one of the links below:

You can also listen to the show right here:

Please consider leaving a review on iTunes and help spread the word about the show.

New episodes are released the 1st and 3rd Tuesday of each month. The next episode will post on November 7th, 2017.