In recent months, I’ve been slowly working my way through Red Dead Redemption 2. I started before the holidays, and the slow pace of the early game tripped me up. It took some cognitive adjustment (and a few tutorial articles) to get my bearings in this new version of the Old West. The game is beautiful, and gives players a vast canvas to devote countless hours to do – well, just about anything.

From hunting wildlife to donating to beggars to playing poker to bonding with a horse to furthering women’s rights to shooting up a “the whole damn town” with a frenemy, Red Dead Redemption 2 gives players a trainload of options for how to spend their time while controlling Arthur Morgan. In addition to tens of hours of primary plot lines to follow, which I’m still nowhere near completing yet, the game has various tiers of what I’ll label Random Encounters. It is these encounters – and how they could relate to a tabletop role-playing game like Dungeons & Dragons – that have been on my mind in recent days.

I wrote years ago how I learned to structure D&D sessions like the original Red Dead Redemption. At the time, I was running a 4th Edition campaign setting that I was making up on the fly. I needed to build a foundation in my mind so I didn’t get lost in my own world. Enter my experience with games like Grand Theft Auto and Red Dead Redemption:

In games such as Red Dead Redemption, the NPCs drive the story forward. I mentioned above that a player can travel to specific locations on the world map to trigger the next story mission; the icons on the map are the names of important NPCs in the world. The player knows at any time during the game the NPCs that are available to trigger a story mission. I used this design to build my campaign.

Back then, I channeled my preparation time into creating prominent NPCs that players could interact with during sessions, knowing the general areas and missions those NPCs would trigger. It was a formula that worked well with my group, and helped me prepare for each session. Clearly, adventure books and modules accomplish this same goal; those texts provide details on important NPCs, and the DM steers the players in the direction of those NPCs to advance the plot.

Where Red Dead Redemption 2 is intriguing is that some tiers of the Random Encounters do not serve a purpose in the classic sense of game design. Completing the encounters does not increase skills, earn your character money, or unlock new items. The encounters are simply there; they exist to be experienced by the player. It’s rather strange because many other areas of the game drive you to complete specific actions to craft an item, earn more money, or improve your character or equipment in some way.

END_OF_DOCUMENT_TOKEN_TO_BE_REPLACED

I participated in a writing series for Boccob’s Blessed Blog, which is a site with useful resources for role-playing games such as Dungeons & Dragons. I wrote 20 Cleric Quest Ideas that can be used to spark the interest of players who are holier than thou. The individual behind Boccob’s Blessed Blog is Andy Hand, and he previously agreed to an interview with me in 2016 and joined me on a podcast last year after we collaborated on a book of monsters for 5th Edition Dungeons & Dragons, which has raised a substantial amount of money for suicide prevention.

I was happy to contribute to Andy’s article series, though I struggled to get started on the quest ideas – the kind of struggle when an open document is starring you in the face and the blinking cursor is simply taunting you with every repetitive blink. I considered using some of the random tables from the Dungeon Master’s Guide, which I’ve put to great use when designing a delve for my players. The “been there, done that” vibe got in the way, so the cursor continued to blink with nary a word written.

I was scrolling through earlier articles in Andy’s Quest Ideas series, and noted that the Ranger quests started with a brief title. I considered the option of using song titles as a starting place for each Cleric Quest Idea, and from that point – I was cooking with gas! I briefly considered Pearl Jam songs (as they remain my favorite band), though I wanted to take advantage of the opportunity to reach new eyeballs to persuade readers to listen to a band they may not have heard of, Dead Sara.

I listed each Dead Sara song in my blank document and vanquished the blinking cursor! I deleted some songs to get down to 20 tracks, which now functioned as quest ideas for a Cleric. From there, it was a matter of writing a few sentences for each song title to create a quest that would relate to a Cleric in D&D. It was enjoyable to write once I unlocked a way to get the article started.

Check out the 20 Cleric Quest Ideas at Boccob’s Blessed Blog, and be sure to read through to the end of the article as I linked to a Spotify playlist of Dead Sara songs arranged in the same order as the quests; this wrinkle may delight only me, though I’m sharing that delight with everyone!

Also, experiment with this device when preparing sessions. Start with song titles – or even movies titles – and use those as a jumping-off point for ideas for characters and quests in the campaign. For example, what would the NPCs in the next important location be like if the starting point for each NPC’s backstory were a title from the last five films that won the Academy Award for Best Picture?

Quick note, I’ll be appearing on and episode of Dragon Talk next Friday, February 8th at 1PM PST. The show is hosted by staff with Wizards of the Coast, and you can watch live on Twitch or the show will appear as a podcast later in the month.

Finally, it has been quite some time since I openly plugged my Patreon site. If you enjoy the content including the articles and podcasts I’ve been posting and would like to support my creative efforts, then please visit my Patreon to consider getting involved for as little as $1/month. Every little bit helps with improving the articles and podcasts that I put out into the world for free, and there are some fun ways to get involved with the content.

During the past two sessions, the brave adventurers traveling through The Shadowfell have been without their devote Cleric of Pelor as he is on vacation worshipping the Sun in some foreign land. How typically Pelorian of him! The remaining party members are a Barbarian, Ranger, Fighter and Rogue; healers, they are not. A solution was needed to fill the gap because continuing the adventure without allowing the party access to a healer would have been a death sentence. A variety of options were available.

I decided to create a NPC that would join the party as part of the storyline in the campaign while our Cleric was missing. The NPC did an admirable job of serving as the healer for the party, but she also served a number of unexpected purposes during the sessions. She increased the amount of roleplaying during a combat-heavy portion of the adventure, and she increased my level of enjoyment because I was also playing a character.

The following column is a description of how I replaced our missing Cleric in two consecutive sessions with a Non-Playable Character (NPC) who fulfilled the Healer role in our Dungeons & Dragons 4th Edition campaign. Below I present how I inserted the NPC into the party and the variety of functions she served during the sessions when our Cleric was out of town.

END_OF_DOCUMENT_TOKEN_TO_BE_REPLACED

EDIT: I want to thank everyone who visited Stuffer Shack and voted for The Id DM. With your help, I was able to move on to the final round. My fate – along with four other fantastic sites – is now up to the judges. Good luck to everyone remaing in the contest, and thank you again for your support!

As a winner of Stuffer Shack’s Site of the Month in June 2011, I was entered in their RPG Site of the Year contest. The contest is running each day this week and features a healthy dose of blogs you should be visiting. The Id DM appears in today’s list of finalists. If this is your first time to the site, then you check visit a recent one-year anniversary summary of my work. 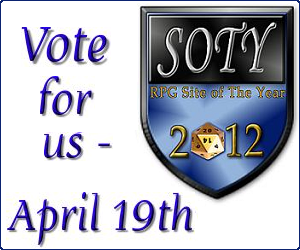 If you feel so inclined, then I would appreciate it if you could click on the SOTY image (pictured right) and vote for The Id DM. However, the main reason you should visit Stuffer Shack to check out the contest is the variety of blogs nominated. I was not aware of all of them before and I’m glad they are featured in the contest. There are many talented people blogging out there, so check out their work! Congratulations to all of the blogs nominated.

While you are visiting Stuffer Shack, you can read two articles I wrote for their site. The first is a detailed background of Brother Laurence of the Chizoba Sect for their Steal This NPC series. In retrospect, my work on Brother Laurence for the column was a precursor to the No Assembly Required monster series. The second article discusses cheating in roleplaying games and suggests how DMs can understand and prevent it from occurring at the table.

Finally, Stuffer Shack has some wonderful products that can be used for roleplaying games. Our homegames use some of the products, including the various markers and mount miniatures.

I was recently asked to contribute an article for Stuffer Shack, and decided to use their Steal This NPC model to further illustrate my previous post on using NPCs as questing hubs to build your campaign world.

Please visit Stuffer Shack for the complete presentation of Brother Laurence of the Chizoba Sect and other great roleplaying gear and information. I know players from my campaign read this blog, and I warn them there are spoilers regarding Brother Laurence that have not yet been divulged in the campaign. To my players, if you can resist the urge, then hold off on reading the article . . . but still check out the rest of Stuffer Shack.

For my homebrew Dungeons & Dragons, 4th Edition campaign, I started my world with the idea that a religious/military organization acted as the King’s right hand to protect the kingdom, enforce laws and provide spiritual guidance to the citizenry. All the other details about my world flowed from that single idea. If you are intrigued by the story of Brother Laurence and the Chizoba Sect, or if you would like to incorporate Religion more thoroughly in your campaign, then I highly recommend reading Johnn Four’s article on using Religion as a focal point in your campaign.

Final note, the artwork for Brother Laurence was a commission completed by freelance illustrator, Grant Gould. He also designed my website and mascot, Iddy the Lich. Check out his site and buy his great art!