The three pillars of Dungeons & Dragons are Roleplay/Interaction, Combat, and Exploration. There are multiple tools available to support Dungeon Masters in creating these pillars at a gaming table. The most common tool is a book that gives you information about each pillar. The most recent example is the Tomb of Annihilation adventure, and the upcoming Waterdeep books. The books describe locations, characters, monsters, and quests that are to be consumed by the players around a table. It’s a successful formula, and it works really well for most groups. It also leaves gaps because no matter how many pages a book like Tomb of Annihilation contains, it cannot provide all of the information required for the three pillars of D&D. Players are bound to go in an unexpected direction, and the DM may want to feature an area of the world that isn’t mentioned or fleshed out in detail in the book. Thankfully, there are other tools available for DMs to build up the pillars.

One tool to assist with brainstorming and generating ideas for the three pillars is the Dungeon Master’s Guide; the DMG has pages and pages of random tables to help build up any of the three pillars for a gaming session. I have long argued that one of the most useful strategies to simplify game preparation and session management is to create some anchor NPCs for players to meet during a session/campaign. I originally referenced my enjoyment of games like Red Dead Redemption, which advances the story through a series of interactions with important NPCs; players are even directed to these NPCs by large indicators on a map! (With Red Dead Redemption 2 coming out later this year, the game is again on my mind.) As I was planning to start a new campaign based on the material in Tales From the Yawning Portal, I realized that I needed to create additional NPCs for the characters in interact with during the first session. I cracked open my trusty DMG and set out to create another group of adventurers that the party could engage with (and perhaps be rivals with later) during their time in the Yawning Portal.

Using the tables (starting on page 89), I rolled up a potential character for the other adventuring party. As you can see from the image, I used the table to jot down some characteristics for the first member of a rival NPC party. In order, the tables provide results for: appearance, high ability, low ability, talent, mannerism, interaction trait, ideal, bond, and flaw/secret. I was running short of time (procrastination is a helluva drug!) so I asked for some assistance with adding more detail to this character. During this period of time, I was in conversation with Duane Sibilly and he appeared on my podcast a few months later. He’s a fellow gamer and I told him about my idea to create another adventuring group for the party to meet at the Yawning Portal. He agreed to help me brainstorm some ideas, and responded with the following details for our “exceptionally ugly” NPC.

My first reaction after reading Duane’s biographical sketch for the NPC was, “Wow, that’s amazing!” He took a list of text results from my rolls on a DMG table, and turned it into a breathing character that would be enjoyable to roleplay during my next game. I was thrilled, and I wanted Duane’s help with additional NPCs from the other adventuring party. He kindly obliged, and created three more NPCs to fill out the adventuring party, The Shining Spear, which was named from another friend on Twitter:

Rivals? The Shining Spear: a group of heroes whose virtue supports whomever is willing to pay the most.

I was crowdsourcing everything!

I found myself having a wonderful time collaborating with other D&D enthusiasts before the first session of the new campaign got underway. In a strange way, it felt like I was playing D&D already. For game preparation and worldbuilding, I had typically relied on published materials or my own creativity. Working with others to prepare a session was great because it helped me build the pillars of D&D more quickly while giving me content I never would have created myself. I sent Duane the following list of NPC characteristics for the three remaining members:

Duane responded with more suggestions for these characters. I did not take every suggestion from Duane and others, but I took the parts I thought fit the most, and incorporated them into the first session with my players.

And the players had a great time interacting with the NPCs! Would they have enjoyed meeting NPCs that I did not prepare and had to improvise at the table? Probably, though my discussions and brainstorming with Duane about the four members of The Shining Spear likely led to interactions with more depth and flavor during that first session. For example, one of my players was a Bard, Leau, and she decided to perform for the patrons of the Yawning Portal to build rapport with Durnan (the owner). A delightful series of events played out from there!

Since my list of characteristics for the first NPC included “plays a musical instrument,” I gave Leau feedback that she could see a strikingly ugly orc, Gorin, watching her play intently – and then she noticed that he was trying to mimic her playing with his own lute while seated at his table. She was intrigued and walked over to the table to speak to Gorin, though I played up how limited his speech is so the leader of The Shining Spear, Phindras, jumped in to speak with Leau.

With Duane’s proposed description of Phindras, my mind wandered immediately to Ambrose from The Name of the Wind. I played him as an extremely overconfident alpha male that tries to woo Leau and speaks highly of his abilities. He offered to play music with her, and she was airily noncommittal in response. The conversation eventually resulted in the two adventuring groups joining forces to follow a map they got from another NPC I created, Cortez, to an abandoned stronghold that is rumored to have great treasures, which played out during the second session. It was hilarious to roleplay Phindras as a spoiled brat, and The Shining Spear gave up on the quest once it seemed like the map was bogus.

It’s been months since we continued with the campaign, though we are planning to return to it in the near future. I imagine the group will encounter The Shining Spear at some point in the future, and it is great for me to have these four characters at my disposal for future plot hooks and developments. 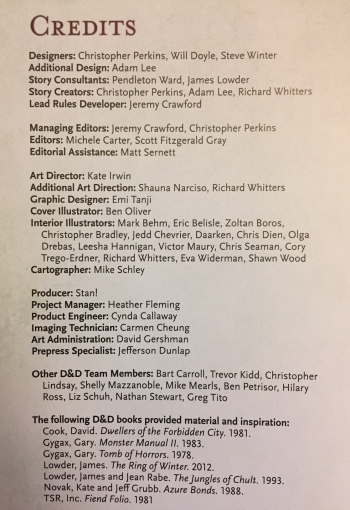 What I learned most from this exercise is that game preparation does not have to exist on an island, and perhaps it is better if it is not done in isolation. Social media means that we are all connected to a “hive mind” that can give us feedback and assist with brainstorming. There are terrible consequences of social media (another article for another day), but this is one case where using it to build relationships and ask for help was incredibly useful. Also, the official adventures we all consume from Wizards of the Coast are not built by one person alone. Just look at the number of folks listed in the Credits for Tomb of Annihilation, and the hundreds of playtesters. The designers of D&D don’t build their campaigns on an island, so why should we?

So next time you are worldbuilding or planning a session, enlist the support of fellow DMs. Give them a seed of an idea, and allow them to take some ownership of it to add details and flavor. I believe it allows a DM to practice improvisation before the gaming session even begins. Think of it as Preparation Improvisation since you start out with a general idea and brainstorm with others to turn it into something functional for a gaming session.

I did something similar for the next session as I used the DMG tables to map out a ruined stronghold, and I got helpful suggestions and encouragement along the way. In my next article, I’ll write more about how I used the Game Room in the stronghold to fill in important plot points. Stay tuned!

Alright, let’s add life to the map the party got from Cortez. Goal is to create a 1-2 session delve. #dnd pic.twitter.com/qKYdifw01G

It led me to wonder if collaboration between dungeon masters should be encouraged more often. I believe the perception is the DM goes off on his or her own to prepare the next session. It would be productive to reconceptualize that time as an opportunity for the DM to collaborate with others to “play” D&D away from the table. Building any of the three pillars away from the table can be fun! And it can be a group experience for the DM; it doesn’t have to happen in isolation.

Try it on for size before your next session.

One thought on “Don’t Prepare on an Island: The Joys of Collaborative Worldbuilding”