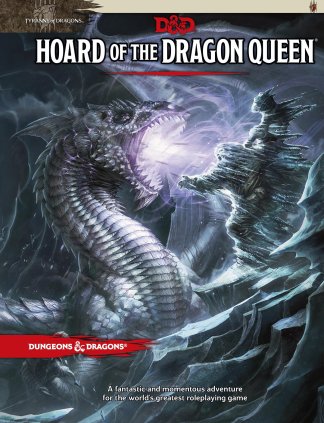 Last week I started to run Hoard of the Dragon Queen for a new group of players online. I will post some thoughts later in the week about the challenges and opportunities posed when running a game online, but first I wanted to discuss how I approached the “inaugural campaign for fifth edition Dungeons & Dragons.” Other quality suggestions have been offered on how to run Hoard of the Dragon Queen by Mike Shea, and while he goes through the complete first episode in its entirety, I will focus on setup and the earliest encounters in Episode 1.

Below are thoughts about some hurdles I came across in the preparation for the campaign, and how I jumped over them. For players who plan to play Hoard of the Dragon Queen, it may be best to skip this article as there will be some spoilers.

Why Are You Traveling to Greenest?

Hoard of the Dragon Queen starts with a map of The Sword Coast and a very brief introduction and overview. It quickly launches into the details of Episode 1 and offers a one sentence direction to view Appendix A for more information on character hooks for the adventure. Flipping to page 87, Appendix A lists 10 different Bonds that could be used by the player to tie his or her story to the events that begin Hoard of the Dragon Queen. The Bond table (d10) can be used to augment or replace a player character’s background to connect them to the town of Greenest, which is where the campaign begins. Other than the one sentence and one-page Appendix, there is nothing that suggests how DMs can motivate players to approach the town of Greenest.

Some groups may not care about this type of backstory, and will be fine starting in any town for any reason. However, Hoard of the Dragon Queen immediately thrusts players into a situation where they see from a distance the town of Greenest being attacked by a dragon. As Level 1 characters, it is not the silliest decision to avoid the town or wait for the dragon attack to subside. I read some comments on Twitter where players have made the decision to avoid the town completely, and it creates a headache for the DM. When I considered how I would start the campaign, I wondered what I would do if I was a player. The most likely answer was I would follow the rails the DM was laying because obviously the party is meant to rush headlong into Greenest – though it would be more effectively if I had a reason to go there.

I decided to take an extra step before the start of the campaign to build up the interest in the town of Greenest. I sent an email to all six players with the extremely subtle title, “Why are you traveling to Greenest?” In the email, I wrote:

Your characters will be traveling to the town of Greenest, which is southeast from Baldur’s Gate. Please consider how your backstory might be leading you to this location; either incorporate Greenest into your backstory or – if you like to allow fate to intervene – use the following table to roll (d10) a new Bond…

I then included the 10 options from Appendix A, since I doubt any of my players had access to the book. The players do not need the Hoard of the Dragon Queen book, so DMs who want to use those Bonds as an option for PCs should make it available somehow to the players ahead of time. I chose email because my players are across the country; other options would be to share them during the first session during character creation.

When the first session did arrive, and the players saw Greenest under siege, it triggered connections they already made about their characters – such as traveling to the town to locate the journal of a long-dead blacksmith. The work on the front end setting up the adventure – and the importance of Greenest to the players – helped avoid the players wondering, “Do we care about this town?” DMs running the adventure should consider building up Greenest ahead of time so players are invested in traveling there in the first place.

Welcome to Greenest, Home of The Meat Grinder

The town of Greenest is not for the faint of heart, for it is under attack by a bevy of raiders and a blue dragon. Compared to the early encounters in Lost Mine of Phandelver from the Starter Set, simply reaching Greenest is a gauntlet and the evening promises to be a war of attrition for the party. When the players enter Greenest, the book calls for random encounters if the party is not successfully using stealth as they move through town. The book further provides an initial encounter against a decent group of foes that triggers a quest to reach the Keep in town. It then calls for three opportunities for combat encounters before the players reach the Keep. It does state players can skip combat through stealth and other means. However, players could easily go through four or more separate combats before they even reach the Keep. Level 1 characters are not sturdy, so simply reaching the Keep is a tall task as written in the book.

I kept the same number of encounters to ensure the town felt unsafe, though I limited the number of enemies in each combat situation. I also rewarded players for smart tactics and trying to remain concealed as much as possible. They ended up having three different combat encounters on their way to the Keep while avoiding a few others with stealth and a familiar who scouted ahead. The multitude of combats called for at the very beginning of the adventure seems over-the-top for Level 1 PCs. It has been suggested to start the adventures with PCs at Level 2, but I dislike that option. There is just something special about starting a character at lowly Level 1 and building them up to a powerful character. Rather than level up the PCs artificially, I toned down the early encounters.

Plus, the non-stop combat encounters early could get boring for the players. The early skirmishes demonstrated to the players the town was unsafe, and produced some drama. The players still took plenty of damage! A lowly kobold struck a critical hit was a sling, which was awesome, and I felt like the combat encounters told a story. The party rescued townsfolk and got them to the Keep. The session ended with the players sprinting for the Keep as guards were barring the doors closed. I think those early encounters accomplished their job without being boring or totally sapping the PCs of all their powers and resources.

Let Me Explain. No, There is Too Much. Let Me Sum Up.

The last recommendation is to read through the first 12 pages of Hoard of the Dragon Queen, take a break for a day or two, and then go back and read them again. In Episode 1, the encounters once the players reach the Keep are presented in a way that leaves a great deal of discretion to the DM – and the players. There is a section on page 7 that is easy to miss:

The sequence of events that follow is up to you and the characters. You can present them with as many of the encounters as you want, in any order. The only exception is “Seek the Keep,” which should be the first encounter after characters enter Greenest.

On my first read through, I read this – though I did not really understand what it meant. During my second reading, I figured out the authors’ intentions. The book presents details on seven possible encounters for the players as soon as the arrive in Greenest. It is wonderful the authors give the DMs such a wide variety of encounters, but it is easy to read through Episode 1 and think the players are meant to do all of them. The players do not need to complete every encounter. The players do not need to complete them in a specific order. The DM has the option to mix and match the encounters. In my game, I already have a player asking about getting to a specific area in town because of his backstory – so I will find a way to work that into the adventure.

It is great to have a shiny new campaign to run! The lack of connection to the town of Greenest, the high degree of difficulty for first-level characters, and the unique presentation of the encounters in Episode 1 can create some challenges for DMs and players to start Hoard of the Dragon Queen on a positive note. Follow these suggestions to ensure you get the campaign off to a great start:

14 thoughts on “Starting Hoard of the Dragon Queen”