I was offline for the past week or two on vacation and busy with work. During that time, my brain was stewing on several upcoming posts related to experiences playing First Edition D&D last month. After some interesting discussion with my DM, I leveled my Rogue to Level 12, and jumped back to playing him in 4th Edition this past weekend. I thoroughly enjoyed spending time scrolling through and debating my Level 12 Feat selection. In addition, I have some other ideas floating in my mind related to the general topic of monster building. The two ideas led me to the following exercise.

I have always enjoyed the character-customization process. Since I wasn’t playing tabletop roleplaying games for most of my life, my customizing was held to videogames. I would spend hours putting together various armor and outfit combinations for characters or paint jobs and accessories for vehicles. Take a game like Tiger Woods; I spent a long time earning enough cash in the game to buy the pieces of clothing I wanted, and even spent time drawing a tattoo for the player – the Rebel Alliance Insignia from Star Wars if you’re really curious. The same applies for games like Mass Effect and even racing games like Midnight Club and SSX many years back. It has always been fun to have options, and Dungeons & Dragons 4th Edition bashes you over the head with character building options.

After 4th Edition clubs you with options in the initial character creation process, it continues to batter your mind with heavy blows of countless alternatives each time your character levels. I think it’s wonderful, although it certainly can slow the game down because the players have so much to manage.  As a result, I’m always thinking of ways to improve the flow of combat with ideas such as two-hit minions, pre-rolling attack and damage die and most recently considering attack powers from monsters that auto-hit like Magic Missle. But I believe players would find something like auto-hit attacks to be cheap, and after all, many monsters already have Auras that deal out damage without an attack roll.

As I mentioned, this has all been festering in my mind for several days, and I decided to combine them into an interesting exercise, which I believe will show just how overmatched the monsters in 4th Edition were (until recent books like Monster Manual 3 and Monster Vault were released) when dealing with PCs. My thought exercise: What would my Rogue’s monster Stat Block look like compared to other Level 12 monsters? The result is below.

I will not bore you with the details of my character’s backstory. This is more of a mechanical exercise than anything else, and I simply enjoy playing around with Power2ool so it gave me a good excuse to use it again. Before comparing the Level 12 Stat Block for my Rogue to Level 12 monster Stat Blocks, some brief background on the mechanical build for my Rogue.

When I started playing 4th Edition, the Dragonborn race appealed to me. It was a new race for me, and I thought it would be fun to roleplay. And I had images of my rogue sneaking into places and blasting minions with his Breath Weapon. However, he’s developed into a major melee force and I have taken Feats to increase his ability to connect on attacks and deal out damage. His Breath Weapon is a nice bonus at this point, but I haven’t taken any Feats to improve it. There are too many other good Feats that fit into how I like to play the character.

Before I created his Stat Block, I realized that it would take up a large portion of space. But I underestimated just how absurd it would look cramped into one place. And I left out descriptions for other Traits that I don’t use all that much like Far Shot as well as Magic Item Daily Powers that did not relate to combat mechanics. I also did not list basic melee and ranged attacks because that would have increased the length of the Stat Block and forced me to add at least one other Trait related to my Bracers of Might Striking, which I did not include in the equipment.

Take a moment to look over the number of options J’hari has at the beginning of the encounter: 5 Traits, 10 Standard Actions, 5 Minor Actions, 1 Move Action (in addition to a normal movement and shifting), and 2 Triggered Actions. Obviously, several of the actions are granted from Daily Powers (Handspring Assault, Deep Cut, Knockout) or Magic Items (Primordial Ring, Cloak of the Desert, Flaying Gloves) but they are still viable options for him at the beginning of the encounter if he has not already expended them.

J’hari is built to get combat advantage as much as possible to deal the additional 3d8 Backstabber damage. With so many ways to achieve combat advantage as a lone fighter – not to mention flanking and other party members dishing out status effects on monsters – it is a good assumption that most of his attacks will include Backstabber damage dice. The simplest attacks with his mace resulats in 1d8 + 7 damage. By itself, this total is quite poor if you look at the Damage By Level table in the DM Screen 2 (see chart below); the average damage from the attack (12.5) – taking into account Brutal Bludgeon, which allows J’hari to reroll 1s – is approximately Level 5 damage. But adding Backstabber changes the attack to 4d8 + 7, which produces an average damage (28) equivalent to Level 20 damage.

J’hari’s Encounter powers increase the hurt as some attacks can deal as much as 6d8 + 7 damage; the average (40) is equivalent to Level 32 damage! I realize the Damage By Level chart is not meant for this type of analysis, but it’s interesting to flip the tables and see how outgunned monsters are at times!

I searched through Monster Manual 3 to see if I could find as complicated a Stat Block. Even looking at Lolth, a Level 35 Solo Lurker (page. 126), there is no comparison: 1 Trait, 2 Standard Actions, 3 Minor Actions, 3 Triggered Actions. And it’s fair to say that Lolth would be a complicated monster for most DMs to run in an encounter. It is a dead horse, but players are dealing with this type of Stat Block while engaged in combat; it’s not a mystery why combat can grind to a halt!

I believe J’hari is a rather straightforward character to play. His goal is simple, gain combat advantage and deal as much damage as possible quickly. And if he can take out some minions with his Breath Weapon or Cloud of Steel, then that is a bonus.  As I mentioned, I left out some of his Magic Items and other Racial and Class abilities. I wonder what a complicated character Stat Block would look like! I encourage others to try this exercise with their character; it may even help speed up the process of playing the character in combat.

Player characters have many tools at their disposal, and the monsters have been engineered in recent years to adapt to the growing threat posed by the Stat Block above. The one thing monsters have over the PCs is they can eat a lot more damage. J’hari has 81 hit points, while a creature from the Monster Vault like the Level 12 Solo Brute, Flamekiss Hydra (page. 176), has 496 hit points. As a Solo Brute, the Flamekiss Hydra will have the ability to deal massive amounts of damage with its At-Will Bite power (+17 vs. AC; 3d12 damage). J’hari has the same bonus to attacks (+17) as the Level 12 Flamekiss Hydra, and by itself, one Bite attack produces an average of 19.5 points of damage, which is Level 11 damage. But the Flamekiss Hydra can make a Bite attack for each head it has left with Hydra Fury; it starts with four heads so during that first round, it has four Bite attacks (12d12) that will produce an average of 78 points of damage (assuming they all hit). Mike Shea at Sly Flourish has talked about higher dice leading to bigger swings in damage from monsters; if the Flamekiss Hydra hits the same target with each of the four Bite attacks, then the range of possible damage is 12 to 144.  If it uses an Action Point to use Hydra Fury twice during a round . . . then the result is 24d12 damage (156 average) with a possible range of 24 to 288! 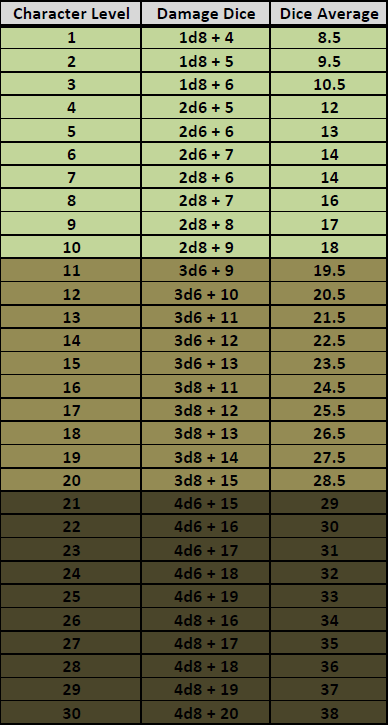 One thing the Fen Hydra does have going for it is more precise damage. The range for possible damage from eight successful Bite attacks is 48 – 104. The Fen Hydra has only a 56-point swing in damage from top to bottom (on eight attacks) while the Flamekiss Hydra has a 132-point swing in damage (on just four attacks). This is a perfect illustration of how the static bonus on your monster damage can really change the range of potential damage.

For a party of well-equipped adventurers, the Fen Hydra is simply not much of a threat. DMs should keep this in mind if they are using monsters from Monster Manual 1 and 2. Look at the full Stat Block for the Fen Hydra (p. 164, MM) and Flamekiss Hydra (p. 176, MV) to see how wildly different the monsters are even though they share the same concept art to illustrate the monster. Quite simply, the players were god-like characters compared to foes of equivalent level before the introduction of Monster Manual 3 and the Monster Vault.

Note: The art I used for J’hari Wrex was found through a Google Image Search. The artist is Char Reed, and she gave me permission to use the image, which was very cool. She is available for commission work through her site.

6 thoughts on “Player Characters Are Gods”